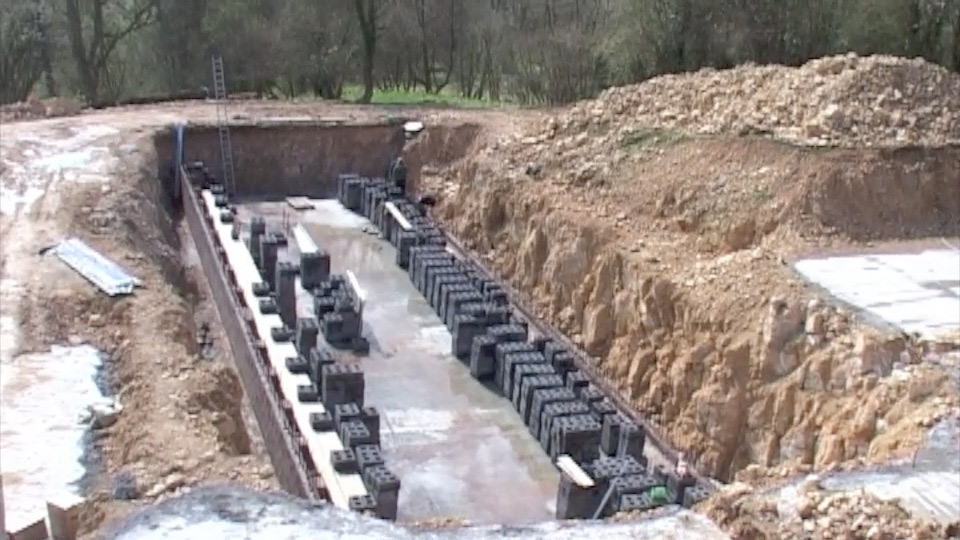 After the extensive excavations and levelling of the bottom to create the basement slab (all the blinding material was of course from the piles of sorted stone and sand that we had already created on site) we placed 18 cubic metres of blinding concrete over the top surface before laying the A393 reinforcement mesh , which sits on spacers that keep the mesh off the bottom by approximately 80mm. The base mesh has 20mm thick bent hockey stick bars tied to them at the same centres of each hollow core block, so that every hollow core block has a T20mm steel reinforcement.

This I personally think was an overkill from the engineers as the entire vertical walls are in compression not in any bending moment – similarly the engineers required us to put reinforcement in all our ICF Concrete walls, again unnecessary as our walls are generally all in compression but you could argue that when you back fill the ground around the walls then there is a bending force involved. We hired an automatic tying tool that literally saved us days of hand tying.

All concrete had an additive from a company called Cre-ART, Compact Civil ALL – extremely easy to use, it is additive poured into the concrete mixer while travelling to site – due to the proximity of the concrete plant to the site – 4 miles away, we choose to mix it on the premises, meaning we could dramatically reduce the time it took on site. The additive makes any concrete completely water proof. We know this as a fact, as when later we pumped this product into our Quadlock walls, after 7 days we filled our underground basement with a 1 metre depth of water, in a 40m x 7m basement – 280 cubic metres of water or 280,000 litres of water – as we have a secondary wall detail that allows us to walk all the way around the underground walls – not a single drop of water was found.

Using a large boom concrete boom to speed things up from Wright Minimix of Bristol, and borrowing a few extra guys from David Hortons Contractors under the watchful eye of boss Paul Tiley (who like getting his hands dirty), we poured 113cubic metres of concrete over an area of 450m2 to a depth of 250mm – thats 19 six cubic metre concrete trucks all dispatched within 3 hours pretty impressive for a domestic build. All concrete was leveled to within millimetre accuracy using laser levelling equipment and a vibrating levelling bar.

When the concrete slab had cured we started immediately with laying 5,700 440mm long, 215mm wide hollow core concrete blocks – make no mistake just because they are hollow – they’re not light – each one weighs 27kgs – I had to personally move 154 tonnes of blocks. They had to be lifted over the two vertical reinforcing bars, and then filled with concrete. As the stone walls above ground were 1m thick – we chose this method of construction as a more economical and better detail as opposed to filling the excavated void from the stone to Quadlock wall with pure concrete. In just under 8 days of working some very early mornings and late nights on floodlights the 44m long, 10m wide, 3m high outer wall structure was completed with strengthening bays – now it was time to put the Quadlock inner walls up.

Back to Video Chapters